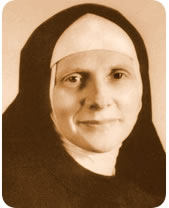 A mystic for our time
Events
Home > Chronology

Paule de Mulatier was born in Lyon, the 3rd July 1903. She was the 7th child of an industrial family. She had a difficult childhood: bad tempered, frequently ill, with a chaotic schooling. She had to surmount all these ordeals.

Very early, she discovers her religious vocation: especially for the contemplative life of the carmelites. But, in 1930, she joins the ’Missionnaires dominicaines des campagnes’ (Order of Saint Dominic’s Preachers: o.p.), and although she is young then, she becomes the 1st general assistant (in september 1932), and the novices’ mistress (1933).

Between 1942 and 1946, Sister Marie de la Trinité will write her spiritual notebook, including her relationship with God during her prayers. On 35 notebooks (3 250 pages), only one is missing, the 20th, as she passed it on to Jacques Lacan, who kept it, and never gave it back.

In fact, in 1945, Marie de la Trinité is very depressed. This bad state will last about 10 years. She is then nearly operated (lobotomized). Instead of that, she will accept an analytic cure with the famous psychoanalyst Jacques Lacan (1950 to 1953). In 1954, she then accepts a quite violent chemical treatment during a cure in Bonneval.

During all these years of illness, meaning different treatments, she studies: catechism, greek, and hebrew. She’s also in contact with representants of other spiritualities.

Although her health is not very well, in 1952, Marie de la Trinité has an active role in the preparation of the general chapter of her Order, and, between 1953 and 1954, she will revise its Constitutions.

In 1956, with the support of bishop Mgr Feltin, she will follow a formation, in order to become a psychologist herself. During her studies, taking place in the hospital of Vaugirard, Jacques Lacan gives her frequent advices. The doctors trust her, and rely on her for different cases.

In 1970, the congregation has to leave Flavigny. Marie de la Trinité then chooses to stay, living alone in a convent’s outbuilding called by pleasantry the “cambuse” (the “shack”). She comes back to her notebooks, and types the hand-written texts.

Her life has now become an ordinary Saint Dominic’s missionary life, living near and with the ordinary people, who, till today, remember her very well.

In 1971, she’s cured from cancer. She leaves Flavigny, to join a near community in Marsannay. But in 1980, she has cancer again, and the operation fails. She dies on the 21st of november 1980. She’s buried in Flavigny’s cemetery.